Tour Stop 148 gives you a front-row seat to superstar Michael Bublé’s phenomenally successful, visually and vocally stunning sold-out To Be Loved Tour, which was seen globally by over two million fans. Filmed for the big screen, Tour Stop 148 gives fans a chance to not only see Bublé perform some of his greatest and most-beloved songs including “Home,” “Haven’t Met You Yet,” “Cry Me A River” and “Feeling Good”. But also go backstage for an exclusive, intimate look into what it takes to pull off such a lavish tour from city to city. Along with Bublé’s stellar performances and the joyous reactions of his devoted fans, we see and hear from a dedicated team of production professionals, technicians, roadies, glam squad, wardrobe, security, management, truckers, riggers and the entire “it takes a village” family who keep the Bublé show on the road. The end result is a flawlessly executed, perfect show every night. Directed by Brett Sullivan, the exquisitely shot and edited Tour Stop 148 embodies the swagger, humor and charm of an all-encompassing Michael Bublé experience. 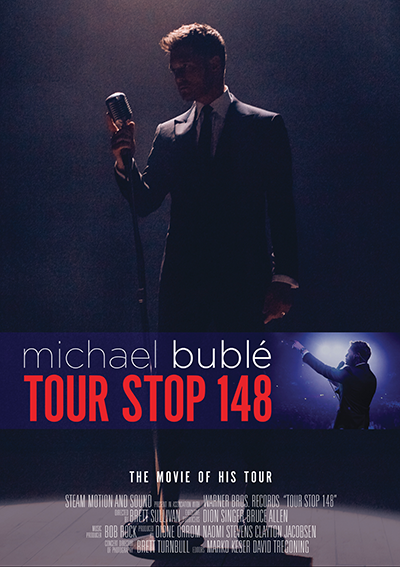