In this Thank Your Gift package, you will recieve the Chicago Quiz Trivia Cards and YOUR CHOICE of ONE Vintage Tour DVD

Chicago's Northshore: Geoffrey Baer has taken viewers all over Chicago - whether by the river, by the lakefront, or by 'L' - and now, he tours Chicago's North Shore. Visit quintessential sites including architectural treasures like the Bahai House of Worship and Frank Lloyd Wright's prairie-style homes. Along the way, learn about shipwrecks, a great train robbery, and a nazi prisoner of war camp, all on the North Shore!

At Naperville, the focus shifts from rail travel to the water, heading north along the DuPage River through Warrenville to West Chicago. Then, it is back to the rails on Chicago's oldest line, the Galena and Chicago Union  (popularly remembered as the Chicago and Northwestern) for the eastward progression back through Wheaton, Glen Ellyn, Lombard, Addison, Villa Park, Elmhurst, Melrose Park, Maywood, Forest Park, River Forest and the tour's conclusion in Oak Park.

The Fox River Valley and Chain O' Lakes: This program weaves the region's stories together, moving from the Chain O' Lakes area near the Wisconsin border more than 60 miles down the Fox River to the peaceful woods south of Aurora. Geoffrey Baer and his crew navigate the region by vintage speed boat, Model T Ford and bicycle as they move north to south along the waterway. 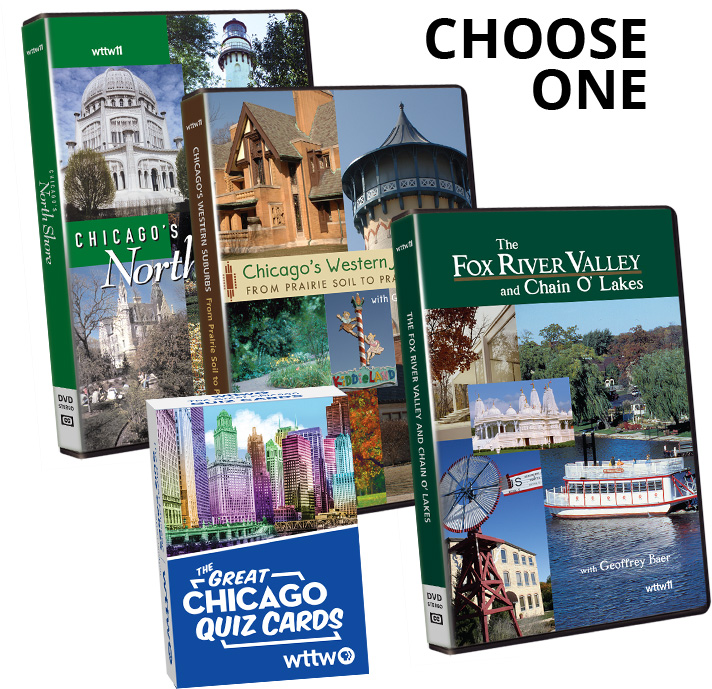