In 1970 the Isle of Wight Festival was one of the largest musical events of its time. Bigger than Woodstock, and controversial from the get-go, hundreds of thousands of people descended on the island. Directed by Academy Award winning filmmaker Murray Lerner, Both Sides Now: Live At The Isle of Wight Festival features new interviews with Joni, discussing her recollections of the event intercut with festival footage, both onstage and behind the scenes, offering a fascinating insight into a now legendary concert from the artists point of view and putting the events of the day into context. Alternatively, fans can enjoy the uninterrupted live concert footage featuring classic songs such as "Woodstock", "Both Sides Now" and "Big Yellow Taxi". This was the final film from Murray Lerner, who sadly passed away not long after the films completion. 10-CD set includes Song To A Seagull (1968), Clouds (1969), Ladies of the Canyon (1970)
Blue (1971), For The Roses (1972), Court and Spark (1974), The Hissing Of Summer Lawns (1975), Hejira (1976), Don Juan's Reckless Daughter (1977), Mingus (1979). 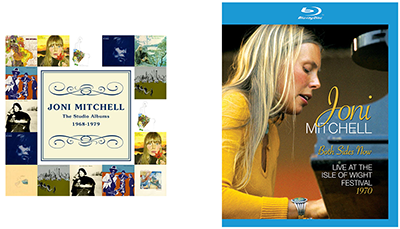