The companion volume to Ken Burns’s magnificent PBS television series—updated and expanded to coincide with the broadcast of a new, two-part Tenth Inning, directed with Lynn Novick.

The authors of the acclaimed and best-selling The Civil War, Jazz, and The War turn to another uniquely American phenomenon: baseball. In words and pictures, they provide a stunningly rich evocation of our beloved national pastime, a game woven inextricably into the fabric of our lives and our national memory.

Geoffrey C. Ward and Ken Burns’s moving and fascinating history of the game goes beyond stolen bases, double plays, and home runs to demonstrate how baseball has been influenced by and has in turn influenced, American life: politics, race, labor, big business, advertising, social custom, literature, art, and morality. The book covers every milestone of the game: from the rules drawn up in 1845 by Alexander Cartwright to the American League’s introduction of the designated hitter in 1973; from the founding of the Brotherhood of Professional Base Ball Players in 1885 to the eight-month players’ strike of 1994; from the 1924 Negro World Series (Kansas City Monarchs vs. Philadelphia Hilldales) to Jack Roosevelt Robinson’s major-league debut in 1947; from the first curveball in 1867 (pitched by Candy Cummings of the Brooklyn Excelsiors) to Nolan Ryan’s seventh and last no-hitter in 1991. This new edition brings the authors’ monumental work into the twenty-first century: steroids, home-run records, the rise of Latino players, the long-awaited Red Sox World Series victory, and so much more.

Nine essays by notable baseball enthusiasts, explore their individual preoccupations with the game that complements this sweeping narrative. Also included is a wealth of pictures and documents that trace baseball’s evolution since the mid-nineteenth century and bring to life its most memorable figures. Monumental, affecting, informative, entertaining, and sumptuously illustrated—Baseball is a book that speaks to all Americans.

With a narrative by Geoffrey C. Ward, a preface to the new edition by Ken Burns and Lynn Novick, a new chapter by Kevin Baker, and an introduction by Roger Angell 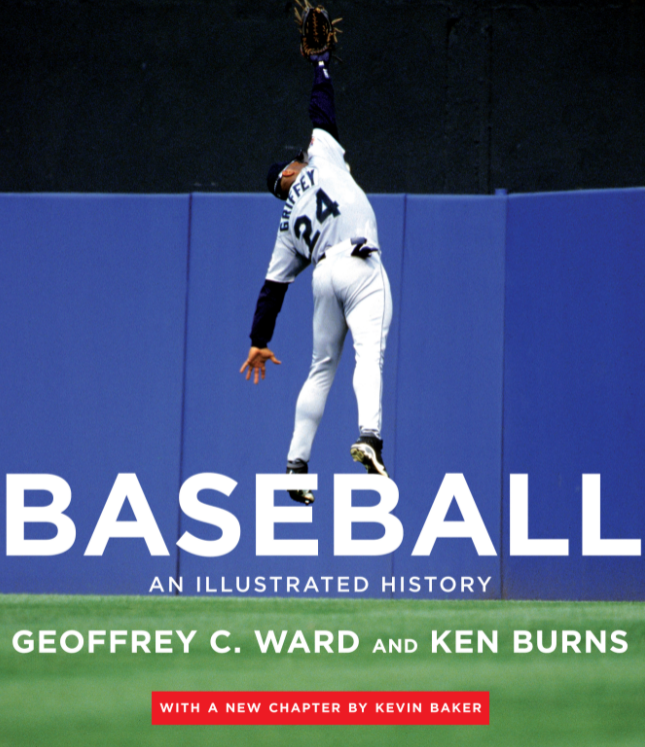