From a retired schoolteacher, to a successful businessman, to a community activist, to a bar owner, a lawyer and a social service worker, the history of Chicago's Lesbian, Gay, Bisexual and Transgender life is the story of everyday Chicagoans with extraordinary stories.

From challenging the military's shunning of its lesbian and gay soldiers and helping to repeal discriminatory laws, to taking gay activism to the streets and building a museum that houses a gay and lesbian archive, to becoming a driving force in Chicago's earliest ongoing gay rights organization and defying the indifference of the federal government towards people With AIDS, this is the story of Chicago's LGBT citizens that helped shape the face of a city.

Spanning the city's history Out & Proud In Chicago tells the story of this vast and diverse community through historical record, personal writings and recollection.

The companion book features nearly 400 images and dozens of essays, stories, and articles depicting Chicago's gay community from the 1800's through the 2000s. 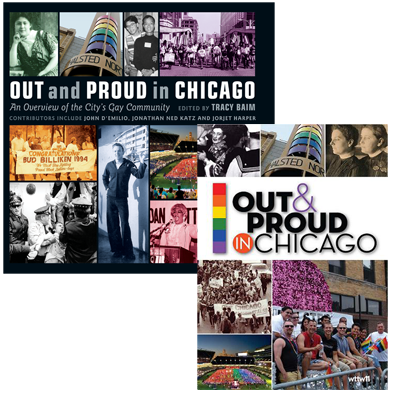